The year-end holidays have inspired in me nothing if not an appreciation of the finer, simpler things in life… Picture books lovingly crafted being among the finest of them all!

Here are just a few of my personal picture book keepsakes…

Walker Books are renowned for their beautiful and timeless children’s classics, and Little Beauty by Anthony Browne is no exception. Playing on the familiar favourite of Beauty and the Beast, it tells the story of a “very special gorilla who had been taught to use a sign language.” But in spite of having everything a primate could ask for (or so a zoo-keeper would assume),  the gorilla grows increasingly sad and one day signs to his keepers that what he wants most in the world is a friend. And so they give him “a little friend called Beauty, with instructions not to eat her. “But the gorilla loved Beauty,” we are told, as the big gorilla holds the tiny, grey kitten in the palm of his hand.  He cares for his kitten and dear friend, and the pair are happy, doing “everything together.” But one night, after watching King Kong, the gorilla becomes “more and more upset… and then very ANGRY,” breaking the television. Rushing in to see what all the fuss is about, the keepers find a broken television and threaten to take Beauty away… Until the kitten begins to sign, “It was ME! I broke the television!” and shows off a rather respectable set of biceps. At this, everyone bursts into laughter, and, of course, the book ends as all good endings do with “Beauty and the gorilla liv[ing] happily ever after.”
A touching tale paired with a frankly gob-smacking attention to detail in Browne’s artwork, this picture book is a treasure and must-have for any family bookshelf.
The Day I Swapped My Dad for Two Goldfish by Neil Gaiman and Dave McKean 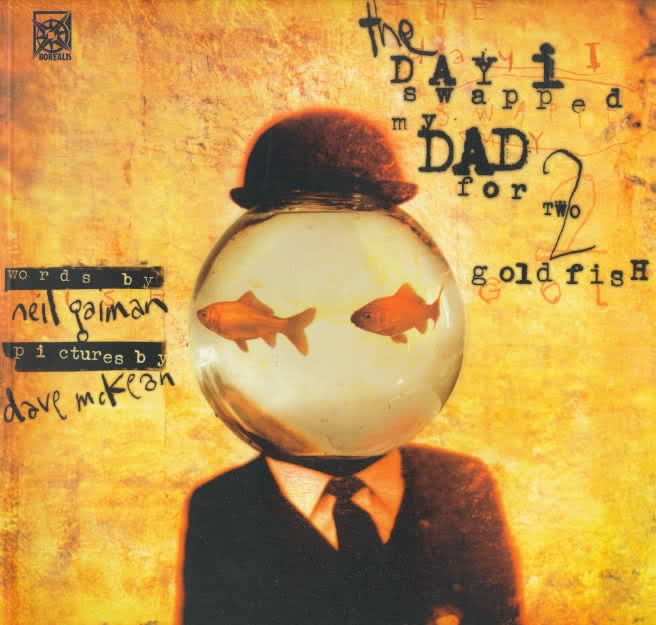 A huge fan of Neil Gaiman and his professional partnership with illustrator, Dave McKean, this picture book is sheer genius and a bowl of mirth for the entire family. Inspired by Gaiman’s young son who, when pestered by his father’s request to get ready for bed (or “one of those things that parents say”), responded by saying that he wished he had a goldfish instead of a dad.  In similar fashion, the book follows the swapping trail that ensues when a boy does just this, swapping his dad for a goldfish. Tattled on by a bothersome sister whose neck he is fond of “putting mud down,” the boy’s mother sends him to retrieve his father. Things get complicated, however, when his friend Nathan has already swapped the dad for an electric guitar, “a big white one.” A gorilla mask, and a bunny named Galveston later, the boy and his sister arrive at Patti’s house to find the father in a rabbit hutch still reading his newspaper and “eating a carrot.” Admitting that the dad made a very poor pet rabbit, Patti is only too delighted to have Galveston returned. Walking back home with dad in tow, the sister turns to the boy and says, “You like her … I can tell.” To which her brother replies, “If you do, I’ll tell everyone at school that you’re secretly fat.”
Remembering the days when my mother raged at the swaps of my own youth (a family-heirloom broach for an ice-cream container of silkworms, for instance), Gaiman’s understanding of the world of children is spot-on, while McKean’s signature use of photo images, ink and scraps compliments this in the perfect match.
(Sign on at Lovereading4kids to see an extract.)
Olivia Saves the Circus by Ian Falconer 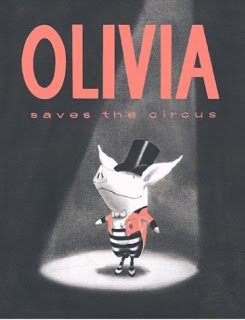 I challenge anyone not to be charmed by Olivia-the-piglet in black-and-white who is very partial to the colour red. And Olivia Saves the Circus is one of her finest moments. Today is show-and-tell day, and Olivia “always blossoms in front of an audience.” Her show-and-tell a story about going to the circus, Olivia begins by informing her audience that “all the circus people were off sick with ear infections.” While lesser-piglets might have been disappointed, Olivia “luckily [knows] how to do everything.”  Covering her body in marker pen pictures, she transforms into “Olivia the Tattooed Lady,” and with a single wardrobe change, “Olivia the Lion Tamer.” And before the day at the circus is done, Olivia has walked a tight rope, ridden a unicycle, donned a clown nose, balanced on stilts, juggled, flown through the air on a trapeze, been “Queen of the Trampoline,” and in a final blazing stroke of brilliance embraced the role of “Madame Olivia and her Trained Dogs” (for dogs who “weren’t very trained” in her opinion), thus saving the circus. “Then one time my dad took me sailing The End.” Her teacher, grown suspicious, asks if all of this is true. “Quite true,” she tells him. “All true?” “Quite all true?” Well, to “the best of her recollection,” the teacher rolling his piggy eyes and turning them heavenwards. Later that evening, her mother tells her to go to bed and “no jumping.” “Okay, Mummy,” the piglet promises. But as all children (piglet or not) are wont to do, her mom finds her moments later jumping on the bed. “Now, Olivia, I said, ‘No jumping’. Who do you think you are – Olivia, Queen of the Trampoline?”
The whimsical style of Ian Falconer, artfully rendered in black, white and red, has the timeless appeal of Babar and Pooh and a bear delivered to Paddington Station, and Olivia’s tall tales will worm their way into yours and your children’s hearts with the ease of a circus-performer, of this much I’m sure.
Not a Box by Antoinette Portis 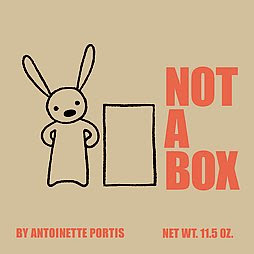 In the same vein as Olivia and her marvellously tall tales, Portis’ Not a Box likewise captures the proclivity of the child’s mind for imaginative stretches. When the story’s bunny is asked, “Why are you sitting a box?” the response is naturally, “It’s not a box” (while the picture of a rabbit in a box drawn plainly in black pen is embellished by a race-car in red). When asked, “What are you doing on top of that box?” the red pen boasts a mountain top while the flag waves triumphantly, “Rabbit Peak.” And so the questions ensue, with the bunny’s increasing frustration in having to reiterate that it is not a box! The final question posed is, “Well, what is it then?” Thinking long and hard, the bunny eventually declares, “It’s my Not-a-Box!” and launches off in a space rocket (not a box!).
Reminiscent, both visually and in theme, to Antoine de Saint Exupery’s The Little Prince, this is a picture book that will open doors for grown-ups and free boxes from a boring fate the world over.
(Click here to read an interview with the author on her book, Not a Box, and the role of imagination.)